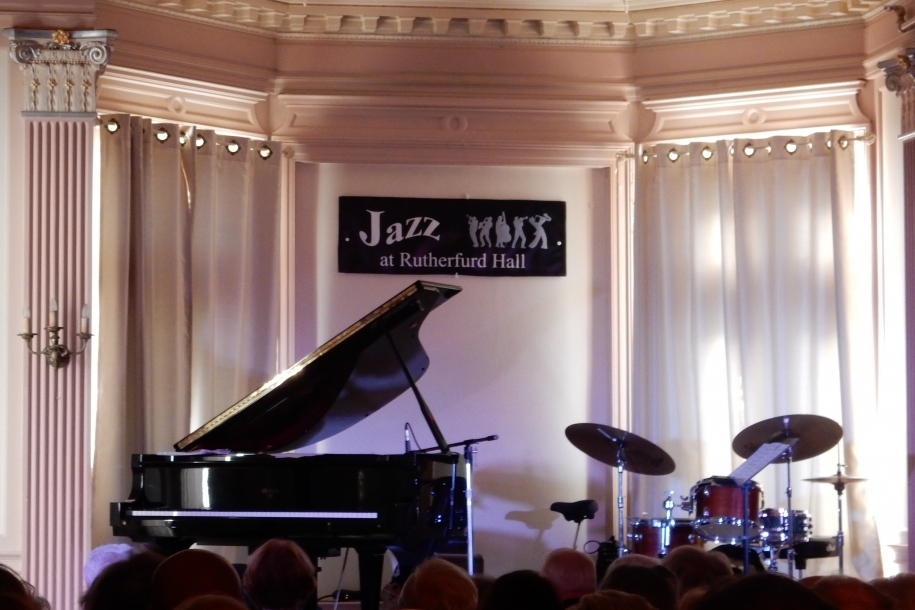 The 2019-2020 season of Jazz at Rutherfurd Hall kicks off October 27 with The Danny Bacher Quartet, then brings in four more thrilling combos over the next half-year.

The concerts are Sunday afternoons from 3-5 p.m. in beautiful and historic Rutherfurd Hall, just off I-80's Exit 19 in Allamuchuy Township.

This season is sponsored by Heath Village, a unique retirement community since 1966, and John Johnson Insurance of John Johnson Auto Group.

The five concerts are:

Danny Bacher is a singer, saxophonist, consummate performer and a fresh face as jazz’s newest bright light – and man, does he swing! His clean, crisp delivery is reminiscent of the true greats in entertainment. An engaging stage presence, a smooth-as-silk voice, and his gift as a storyteller all come together to complete this package. Add to that his saxophone prowess and you have one of the hottest musicians on the scene today. On his first CD debut on Whaling City Sound, Danny presented Swing That Music!, a musical tribute to the three Louis: Armstrong, Prima and Jordan, to rave reviews with an “A” list band of jazz royalty including cornetist Warren Vaché (Rosemary Clooney/Annie Ross); drummer Bill Goodwin (Phil Woods); guitarist Howard Alden (Woody Allen films); Jazz tenor sax legend Houston Person (Etta Jones, Freddy Cole), Grammy-nominated trombonist and arranger, Pete McGuinness; pianist/arranger Jason Taborek; and saxophonist David Demsey (William Patterson College). Adding to this beautiful rainbow of sound is ‘rising star’ Cyrille Aimee on two outstanding duets with Bacher, forming a truly musical dream team. “Jazz has always been music that resonates with me,” Danny notes. "The secret of serious fun is not to take too seriously," something this prodigiously talented singer/songwriter/saxophonist knows in his bones.

Swingadelic began in 1998 as the neo-swing movement was cresting. Upright bassist Dave Post gathered his jazz and blues playing friends together to play engagements at New York City's Supper Club, Swing 46 and Windows On The World, the former restaurant atop of the World Trade Center. As the swing scene waned the band was able to turn to swing dance groups, concerts, festivals, schools and private engagements to keep active. Swingadelic has performed at Lincoln Center's Midsummer Night Swing, NJPAC, and at many festivals, including Bele Chere (Ashville NC), MusikFest (Allentown PA) the CD 109 Jazz & Blues Festival (Red Bank, NJ) and the Sanofi-Aventis JazzFest (Madison NJ). The band plays about 100 dates per year and has traveled from Maine to Atlanta. Swingadelic has maintained a residency for six years at Swing 46 in NYC where it performs every other Monday as a ten piece "little big band." Swingadelic has seven CDs and has been recording for the ZOHO Music label since 2011. Swingadelic CDs have been in the JazzWeek Radio charts top thirty and garnered many critically acclaimed reviews in jazz publications such as Jazz Times and All About Jazz. The band's newest ZOHO release (April 2017) is called Mercerville, a collection of songs written by the legendary Johnny Mercer who was not only an iconic figure as a lyricist and composer for the American Songbook, but he was a celebrity and entertainer throughout the '40s and '50s, with a popular radio show during the war years had gigs with a lot of the big bands of the era, hit records of his own and winner of four Academy Awards for Best Song as well as two Grammys for Song of the Year.

Tomoko Ohno, pianist and composer, has performed at Lincoln Center, Weill Recital, Carnegie Hall, The Blue Note, and Birdland, in addition to appearing on live radio broadcasts by WBGO and WNYC, and ABC TV's Good Morning America. She has performed and/or recorded with Slide Hampton, Claudio Roditi, James Spaulding, Rufus Reid, The John Lee Quartet, The Dizzy Gillespie Alumni Big Band and Sherry Maricle and the Diva Jazz Orchestra, as well as working as a side musician with such diverse musical ensembles as the Harlem Spiritual Ensemble and The Spirit of Life Ensemble.

Max Morden, trumpet player, is noted for his abilities to cross genres from baroque to jazz, and has been heard on Broadway and in many of the area’s finest ensembles and concert halls. He has performed with Dave Brubeck, Dena DeRose, Greg Hutchinson, Freddie Hubbard, Dizzy Gillespie, Wycliffe Gordon, Steve Turre, and many more. As Principal Trumpet for Gramercy Fanfare Trumpets, he has heralded such celebrities as Barbara Walters, Mary Tyler Moore, Rosie O’Donnell, Steve Martin, Kevin Klein, major corporate bigwigs, and even Smokey Bear.

Tim Givens currently plays with New York Electric Piano and the Cecilia Coleman Quintet. He has toured with Lou Donaldson, Curtis Fuller and Chris Barron. He has recorded with Ray Bryant, Gloria Cooper and Steve Smithie as well as recording for HBO and Nickleodeon. His own group features Tim on cello.

Dan Levinson, the 2017 winner of Hot House Magazine's "NYC Jazz Fans Decision" award for Best Clarinetist, is equally at home as both leader and sideman, fronting his own groups as well as performing with those led by others. His roster of musical associates includes such names as Mel Tormé, Wynton Marsalis and Dick Hyman. Originally from Los Angeles, Dan has been based in New York City since 1983, although his busy schedule often takes him across the continent and around the world. He has performed in Brazil with filmmaker Woody Allen's band, as well as in Japan, Iceland, Latvia, and 18 European countries. From 1990 to 2009 Dan toured with singer/guitarist Leon Redbone. Since 1993 he has been a member of Vince Giordano's Nighthawks, the country's preeminent 1920s-'30s hot jazz orchestra, with whom he has appeared at Carnegie Hall, on Late Night with Conan O'Brien, and on Garrison Keillor's A Prairie Home Companion radio program. Dan's successful Benny Goodman tributes have been presented both in the U.S. with James Langton's New York All-Star Big Band and in Europe with the Berlin-based Swing Dance Orchestra. Dan has recorded over 150 CDs, including nine under his own name. He can be heard on the soundtracks of the films "The Cat's Meow", "Ghost World", "The Loss of a Teardrop Diamond", and Martin Scorsese's "The Aviator", as well as on all five seasons of the Grammy Award-winning HBO television series "Boardwalk Empire".

The 2019-20 season of Jazz at Rutherfurd launches with the Danny Bacher Quartet, led by this talented singer, saxophonist, consummate performer and fresh face as jazz’s newest bright light. And man, does he swing! Danny is joined by Bill Moring (bass), Alvester Garnett (drums) and Oscar Perez (piano). Save by purchasing tickets for all five jazz concerts in the series in advance.