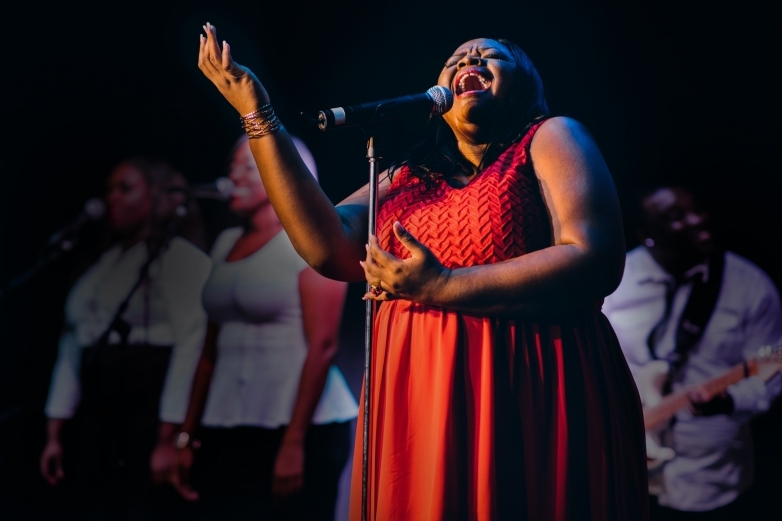 PHOTO: CeCe Teneal - "Portrait of a Queen" - A Tribute to Aretha Franklin

HACKETTSTOWN, NJ: The professional non-profit theatre Centenary Stage Company has announced its 2020/21 season. The season features the Professional Theatre Series, Fringe Festival, NEXTstage Repertory, the January Jam and other concerts that showcase top tier musical talent from across the country, as well as the return of the annual Women’s Playwrights Series plus a vast array of professional dance concerts.

Centenary Stage Company’s Professional Theatre Series, as always, offers a wide variety of programming suitable for all kinds of audiences.

Meteor Shower by Steve Martin continues the Professional Theatre Series, running February 19-March 7, 2021 in the Sitnik Theatre of the Lackland Performing Arts Center. This comedic play, described as being “keening-like-a-howler-monkey funny,” is set in 1993 in Ojai, California, and follows the story of two couples during the course of a dinner party. Ticket prices range from $10-$27.50.

A world premiere rounds out the mainstage Professional Theatre Series. Turning by Darrah Cloud runs April 22-May 2, 2021 in the Sitnik Theatre of the Lackland Performing Arts Center. Set in the heart of 1930s Newark, New Jersey, Turning follows a group of scrappy young women as they begin to train in backyard gyms for what would become the experience of a lifetime. Inspired by the real-life stories of Hackettstown resident and 1st US Gymnastics Team member, Ada Lunardoni, Turning brings to life the story of the first US Women’s Gymnastics team to compete in the controversial 1936 Berlin Olympics. Turning was originally a part of the annual Women’s Playwrights Series. Ticket prices range from $10-$25.

The Fringe series begins with the production of Rent Control, October 8-11, 2020 in the Edith Kutz Black Box Theatre of the Lackland Performing Arts Center. A cautionary tale of greed and redemption, Rent Control follows a struggling actor who falls backwards into an NYC rent-controlled apartment and turns it into a lucrative Airbnb scheme in a wild but true one-man show. Ticket prices range from $10-$25.

A Parlor Theatrical production by Craig Fols ends the Fringe Festival. A Tale of Two Cities As Cobbled Together by the Brothers Lovejoy runs October 22-25, 2020 in the Sitnik Theatre. Two middle-aged brothers, locked in their house, spend their free time rehearsing a two-man version of A Tale Of Two Cities, using what's in the house for sets, costumes and props, revising, improvising and kvetching as the production proceeds. Ticket prices range from $10-$25.

The Concert Series begins with The Blue Dahlia. Founded in 2012 by singer-songwriter Dahlia Dumont (vocals, ukulele), Blue Dahlia features lyrics in English and French, French and Mexican accordion, klezmer violin, rhythms of reggae, ska and Latin America, and the sensual voice of jazz and French chanson. Blue Dahlia features music influenced by Dumont’s Eastern-European heritage, Brooklyn upbringing, and her travels while teaching in France and Senegal. Blue Dahlia performs on January 9, 2021 at 8 p.m. in the Sitnik Theatre of the Lackland Performing Arts Center. Ticket prices range from $15-$22.50.

The January Jam ends with the piano master Chuchito Valdes. With influences of Caribbean rhythms and jazz, Chuchito creates an exciting and energetic blend of spicy music that drives audiences wild. Chuchito captivates with his sensitivity and drives excitement with his dynamic band. The performance takes place on January 23, 2021 at 8 p.m. in the Sitnik Theatre of the Lackland Performing Arts Center. Ticket prices range from $15-$22.50.

Centenary Stage Company’s variety of concerts rolls on with a rescheduled performance from Seamus Egan on March 14, 2021 at 2 p.m. in the Sitnik Theatre of the Lackland Performing Arts Center. From his beginnings as a teen prodigy, to his founding of the Irish-American powerhouse band Solas, to his current project touring with friends and musical guests, Egan has helped define the sound of Irish music today. Children/student prices are $20, and adult ticket prices are $29.50.

The Concert Series continues with the American Patchwork Quartet. APQ is on a mission to reclaim the immigrant soul of American Roots Music. Highly acclaimed artists Falu Shah (vocals), Clay Ross (guitar/vocals), Clarence Penn (drums) and Yasushi Nakamura (bass) showcase the dynamic diversity of contemporary culture by reimagining timeless songs from America’s past. The American Patchwork Quartet performs on March 20, 2021 at 8 p.m. in the Sitnik Theatre of the Lackland Performing Arts Center. Ticket prices will range from $15.00 - $22.50.

The Concert Series comes to a close with CeCe Teneal: Portrait of a Queen – The Aretha Franklin Tribute (pictured here). CeCe has travelled the world with her talent, gracing the stage before Buddy Guy, Joe Cocker, Johnny Lang, and the legendary B.B. King, to name just a few. Catch CeCe Teneal on June 19, 2021 at 8 p.m. in the Sitnik Theatre of the Lackland Performing Arts Center. Ticket prices range from $17.50-$27.50.

Ticket prices for all concert events increase by $5 the day of the event.

The Centenary Stage Company’s 2020/21 Dance season begins with a family favorite: The New Jersey Civic Youth Ballet production of Nutcracker. An enchanting ballet and holiday favorite, The Nutcracker is a classic production for all ages. With the talented young dancers of the New Jersey Civic Youth Ballet, Warren County's only non-profit ballet company, and featuring professional dancers from around the world, this production is sure to delight! Nutcracker runs December 18-20th, 2020 in the Sitnik Theatre of the Lackland Performing Arts Center.

Centenary students will have the chance to demonstrate their talents with the Student Dance Concert on April 28, 2021 in the Sitnik Theatre of the Lackland Performing Arts Center.

The Dance series continues with moe-tion dance theater on May 15, 2021.  Established in 2007, moe-tion is a modern dance theatre company based in New Jersey. Under the artistic direction of Maureen Glennon Clayton, the company is dedicated to experimenting and creating new forms of expression. Tickets will be $12.50 for students and children under 12, and $20.00 for adults.

The Dance series rounds out with the XY Dance Project on May 22, 2021. The XY Dance Project has a unique movement style that blends contemporary dance through the spiritual rhythms of African dance, the grace and peace of Tai Chi and the heart of street dance. Tickets will be $12.50 for students and children under 12, and $20.00 for adults.

Centenary Stage Company’s Women’s Playwrights Series was initiated in 1992 and has helped develop the new work of over 60 playwrights from around the country, and produced fifteen World Premieres in as many years from works developed in the playwright series. The Centenary Stage Company 2020/21 season will have two groups of Women’s Playwrights Series readings. The first will take place November 4, 11 and 18, 2020 and will consist of plays originally slated to be read during the previous season. The second set will take place April 14, 21 and 28, 2021. A $5 donation is suggested to attend a reading and required to make a reservation in advance.

The season begins with a handful of productions from NEXTstage Repertory, the all student performance division of Centenary University’s Theatre Department. It all starts with a TBD Young Audience Series musical, running October 1-5, 2020. Ticket price is $15.

Next, Bachelorette by Leslye Headland plays November 5-8, 2020 in the Little Theatre. Bachelorette is a comedy about three dysfunctional friends who attempt to leave the past behind while serving as bridesmaids at the wedding of a woman they mocked mercilessly back in high school. Fueled by jealousy and resentment, the girls embark on a night of debauchery. Ticket price is $15.

A yet to be determined, NEXTstage Rep show will run February 4-8, 2021, with ticket information to be released in the fall of 2020.

The NEXTstage Repertory series continues with Sweat by Lynn Nottage, running March 25-29, 2021 in the Little Theatre. The play details the life of a close-knit group of friends who have been affected by their factory closing, ending the only way of life the town has known for generations. Sweat won the 2017 Pulitzer Prize for Drama. Ticket price is $15.

CSC’s Young Audience Series presents Shake it Up on April 10, 2021. Ticket pricing and times will be announced closer to the event.

Then, Toxic Avenger runs April 8-18, 2021 in the Sitnik Theatre of the Lackland Performing Arts Center. Toxic Avenger is an edgy, comedic musical featuring an unlikely hero, his beautiful girlfriend, a corrupt New Jersey mayor and two guys who play everyone else. Ticket prices range from $10-$27.50.

For more information, specific performance dates or ticket price details please visit www.centenarystageco.org or call the box office at (908) 979-0900. The box office is located in the Lackland Performing Arts Center on the campus of Centenary University at 715 Grand Ave. Hackettstown, NJ. The box office is open Monday through Friday from 1-5 p.m. and two hours prior to every performance. Centenary Stage Company can also be found across social media platforms Facebook, Instagram and Twitter. Like and follow to receive the latest in Centenary Stage Company news and special offers.