Washington BID Plans Full Event schedule for 2021, Steampunk and Day of the Dead 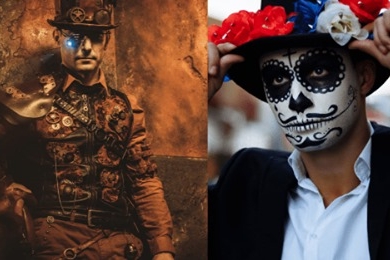 With optimism rising that 2021 will bring better times, the Washington Business Improvement District is planning for a full complement of events this year.

“We feel confident that as the vaccine rollout continues to get momentum and with people generally adhering to safety measures in public, we can anticipate good things moving forward,” said Melanie Thiel, Executive Director of the WBID. “In fact, we are actually adding two new unique premiere events to our schedule that we think will be a draw for new audiences to the Borough.”

A Steampunk Vendor/Music Festival is scheduled for Saturday, May 8, and a Day of the Dead parade and celebration will be on Thursday, October 28. These will not only bring something new to the Borough, but the region.

“These are two events that nobody in our area has ever done before; at least not on the scale that we are planning,” said Thiel.

Steampunk is a genre of fiction, art, design, and music which tends to draw from Victoriana and steam-based tech and industrialism with some gothic influences. Many attendees at similar events dress up in clothing with a steampunk theme. The event will also feature three steampunk themed bands.

The Day of the Dead, originally a Mexican holiday, is now celebrated throughout the Southwest, usually just after Halloween. It has also been referred to as All Souls’ Day. The holiday involves family and friends gathering to pray for and to remember friends and family members who have died. It is commonly portrayed as a day of celebration rather than mourning. Many people use the opportunity to remember pets and events, as well. A parade and other activities still in the planning stages will be incorporated in the Washington event. Attendees are going to be invited to dress up in makeup and clothes consistent with the theme and to take part in the parade.

The WBID’s established events are also on this year’s schedule. They include the Arts, Music and GREEN Fest on June 19, which also signals the start of the Farmers’ Market season, the Festival in the Borough on September 18, and Hometown Halloween and Hometown Holiday in October and December, respectively.

Throughout the Farmers’ Market season there will be a host of special events and activities that will include Appreciation Days, Live Music, Christmas in July, Beach Day and a Mini-Kids Fest, and other days still to be announced.

The WBID and the community will also be celebrating the opening of the Borough’s first craft brewery, Buttzville Brewery, sometime this spring.

To learn more about the WBID and its myriad activities and programs, visit washingtonbid.org and/or LIKE its Facebook page and Twitter page. The WBID also welcomes volunteers to help with events and is particularly looking for volunteers for its Farmers’ Market.