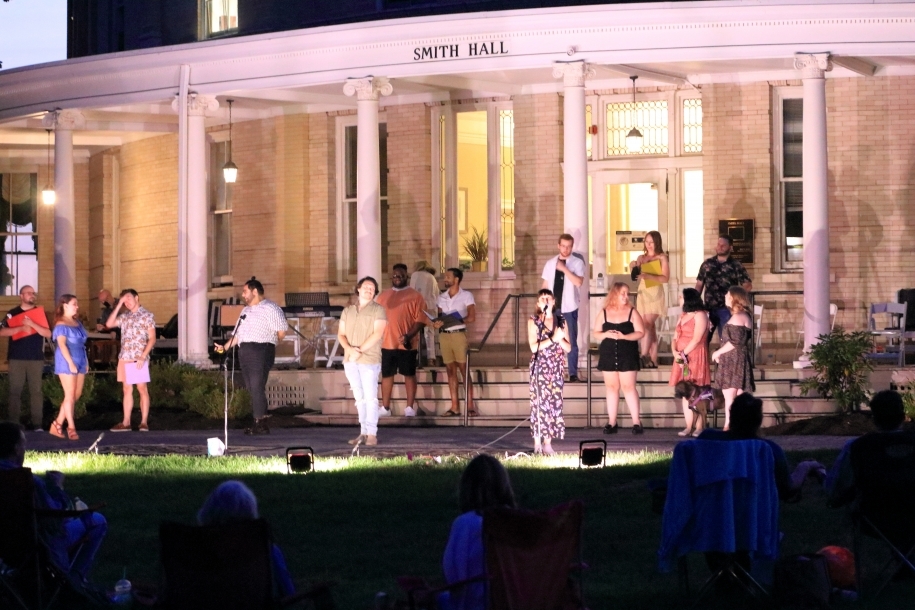 Centenary Stage Company announces the 2021 Summer Season schedule featuring a full lineup of musical theatre productions, concerts, and the return of the popular Front Porch Series hosting a selection of outdoor cabarets and family friendly Young Audience Series offerings.  Tickets for all 2021 Summer season events will be available for purchase beginning May 1, 2021.

The 2021 Summer Season launches with Forever Plaid July 8-18 in the Sitnik Theatre of the Lackland Performing Arts Center.  Once upon a time, there were four guys (Sparky, Smudge, Jinx and Frankie) who discovered that they shared a love for music and then got together to become their idols - The Four Freshman, The Hi-Lo's and The Crew Cuts. Rehearsing in the basement of Smudge's family's plumbing supply company, they became "Forever Plaid". On the way to their first big gig, the "Plaids" are broadsided by a school bus and killed instantly. It is at the moment when their careers and lives end that the story of Forever Plaid begins. Singing in close harmony, squabbling boyishly over the smallest intonations and executing their charmingly outlandish choreography with overzealous precision, the "Plaids" are a guaranteed smash, with a program of beloved songs and delightful patter that keeps audiences rolling in the aisles when they're not humming along to some of the great nostalgic pop hits of the 1950s. Specific performance times are: Thursdays July, 8 & 15 at 7:30 p.m.; Fridays, July 9 & 16 at 8 p.m.; Saturdays July 10 & 17 at 8 p.m.; and Sundays, July 11 & 18 at 2 p.m. Tickets range from $18 – $29.50 with discounts available for seniors (65+), students and children under 12 on select performances, as well as, “Buy One, Get One” tickets on Thursday evenings for Family Night.

The summer season continues with the musical production of Always… Patsy Cline July 29 to August 8 in the Sitnik Theatre of the Lackland Performing Arts Center.  One of the most produced musicals in America according to American Theatre Magazine, Always... Patsy Cline is more than a tribute to the legendary country singer who died tragically at age 30 in a plane crash in 1963.  The show is based on a true story about Cline's friendship with a fan from Houston named Louise Seger, who befriended the star in a Texas honky-tonk in 1961, and continued a correspondence with Cline until her death. The musical, complete with down home country humor, true emotion, and even some audience participation, includes many of Patsy's unforgettable hits such as Crazy, I Fall to Pieces, Sweet Dreams and Walking After Midnight... 27 songs in all.  The show's title was inspired by Cline's letters to Seger, which were consistently signed "Love ALWAYS... Patsy Cline."

All Front Porch Series events will take place outdoor on the front porch of the Seay Building located at 400 Jefferson St. Hackettstown, NJ on the campus of Centenary University.  Front Porch Series events are free with donations appreciated.  Seating is limited and reservations are encouraged.  Attendees are asked to provide their own seating, i.e., lawn chairs or blankets and all seating is on a first come, first served basis.  For reservations, call the box office at (908) 979-0900.

Finally, the 2021 Summer Season closes with a special fundraiser concert featuring The British Invasion Years on Saturday, August 21 at 8 p.m. in the Sitnik Theatre of the Lackland Performing Arts Center. This special “one night only” concert is sponsored, in part, by the Hackettstown Rotary Club and the event also serves as a fundraiser for their organization. More than just the Beatles, this nostalgic musical tribute spans the entire 60s British Invasion era with music from BOTH sides of the Atlantic, and is three acts in one: The first act includes songs by iconic British groups such as The Zombies, Dave Clark Five, The Rolling Stones, The Hollies, Herman's Hermits, Gerry and the Pacemakers, Manfred Mann and many others. The American Response follows, with music by such legendary artists as The Monkees, Simon & Garfunkel, The Beach Boys, The Mamas and The Papas, The Turtles, Paul Revere & The Raiders, to name just a few. This journey through the 1960s concludes with an extraordinary finale with songs from the four lads that started it all– The Beatles! Tickets are $30 for all seats bought in advance.  As with all concerts and special event tickets prices increase $5.00 day of the performance.

Centenary Stage Company’s Summer Festival 2021 is sponsored in part by The House of the Good Shepherd, Fulton Bank, and the Hackettstown Rotary Club.

Centenary Stage Company remains committed to the health and safety of our community and adheres to all requirements set forth by the State of New Jersey including, but not limited to; observing social distancing, limited capacity, and requiring masks or facial coverings. For more information regarding CSC COVID-19 policies visit www.centenarystageco.org/faq.